TECH NEWS: What’s all this metaverse hype about and why only now? 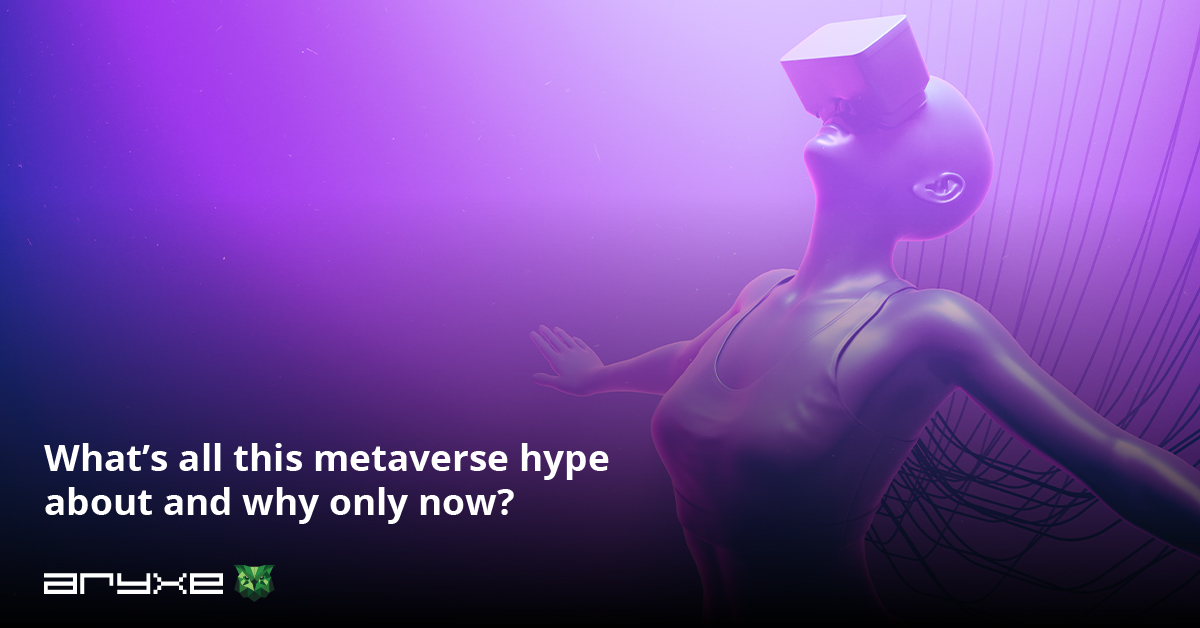 Will you soon start checking your Facebook feed in Fortnite while wearing a pair of AR glasses? Will you be meeting your friends in a virtual Starbucks for a cup of coffee or doing a sales pitch to a client in a virtual conference room? There are so many questions we have about the metaverse now that it’s all people talk about and in this article, we will try to cover the basics.

We can’t but notice that the metaverse storyline is taking off just now despite it being around for many years. Before we jump to conclusions by saying Facebook’s rebranding into Meta is the reason, let’s consider the climate of today. We live in times marked by tech prolificity, which is so evident it needs no further explanations. Additionally, consider the pandemic and its impact on how we use technology and how we need to stay close while being remote. As a result of the coronavirus pandemic but not only we are seeing grave economic instability all around. Last but not least, this remoteness forced upon us leads to the overall lack of happiness, which should never be taken lightly.

Where did the term “metaverse” come from?

The term was minted in the 1992 novel written by Neal Stephenson, where it referred to a 3D virtual world inhabited by avatars of real people. Truth be told, there’s no universally confirmed or accepted definition of a real “metaverse”. The closest to it is that it’s a fancier successor to the internet. And, yes, we’re aware of the defects of this definition but the term and its definitive meaning are still very much under construction, with businesses and consumers exploring its potential. It stands for a concept of an online version of reality, an epitome of an online universe, and a future iteration of the Internet. The metaverse should allow its users to work, shop, game, meet, and socialize together while being physically apart.

The tech that encompasses today’s version of the metaverse is AR, VR, AI, 3D reconstruction, IoT, 5G, and blockchain. Some of these are still quite exotic to a regular internet user but all of the components are constantly and consistently maturing, reaching saturation and becoming more affordable. An important piece of information here is that independently, these technologies are powerful but only in a symbiosis do they form a truly powerful and never-before-seen version of the internet.

Why are we intrigued by metaverse?

The metaverse meets people’s needs and holds the promise of connection between them in ways each of the technologies we have available today cannot provide on their own. When combined, the tech we have has the ability to influence behaviors, sense of belonging, and social satisfaction even. All of this sounds particularly interesting now, during a period of modern history where so many of us are socially isolated – thus fueling a greater desire for synthetic experiences, be it personal, professional, commercial, civic, or academic. Bottom line is, consumers are ready for innovative experiences and the pandemic has undoubtedly quickened the adoption of the metaverse.

Why are we intrigued by metaverse now?

The metaverse phenomenon isn’t really new – ever heard of Second Life or Decentraland? People were becoming online land barons and selling virtual items nearly two decades ago. Many older worlds also inspired the kinds of utopian predictions we see around the metaverse today.

The reason why there’s a hype about all things metaverse right now is due to VR and AR being a lot closer to consumer application, despite VR being niche and AR somewhat nascent. The numbers back that up – An estimate suggests that Facebook has sold around 8 million Oculus Quest 2 headsets. Those numbers are tiny compared to how many phones and consoles are sold but they are enormous when compared to basically fictional VR market from ten years ago.

Industry leaders like Google, Verizon, Microsoft, Meta, Disney, Nike, Adida,s and many more are aggressively generating strategies to own a share of voice in the new space. Facebook, one of the largest players online had its name changed to Meta to mark its focus on building a metaverse.

Why is Facebook all of the sudden so crazy about metaverse?

Meta’s primary source of income is advertising. Facebook renaming itself Meta could be a reaction to Apple gaining greater control of the advertising. By changing their technology, Apple forced Facebook to aggregate previously controlled data. Oculus, a platform owned by Meta, might actually be their best bet in regaining the control in days and times to come.

What’s all this talk about NFTs being part of the metaverse?

NFTs are complex on their own but in order to make this as clear as possible, NFTs are a way in which we can track and mace record of who owns a specific virtual good. Creating and transferring virtual goods is a big part of the metaverse, which is why NFTs are a potentially crucial financial architecture for it. To put it simply, say you buy a virtual pair of snickers in a certain metaverse platform, NFTs will create a permanent receipt and allow you to redeem the very same pair of snickers no matter the metaverse platform you’re in.

In addition to their usefulness, non-fungible tokens (NFTs) along with cryptocurrency will facilitate less centralized virtual worlds.

It is unequivocally correct that almost every single major tech player wants to own their unique piece of the metaverse, it’s not just Facebook.

Like all technology, the metaverse will bring ugly downsides, such as general addiction to the new technology, inability to differentiate the real world and the virtual one, losing time you could and probably should be spending differently, buying things you don’t actually need, spending money you may not even have, and the list goes on.

A lot of people will turn their attention to the metaverse in the next several years to come. Assuming metaverse does arrive and offers the promised “unprecedented interoperability”, let’s hope that it creates the benefits that will offset the disruption that it will inevitably cause once and if it is here.