The Environmental Cost of #CryptoArt 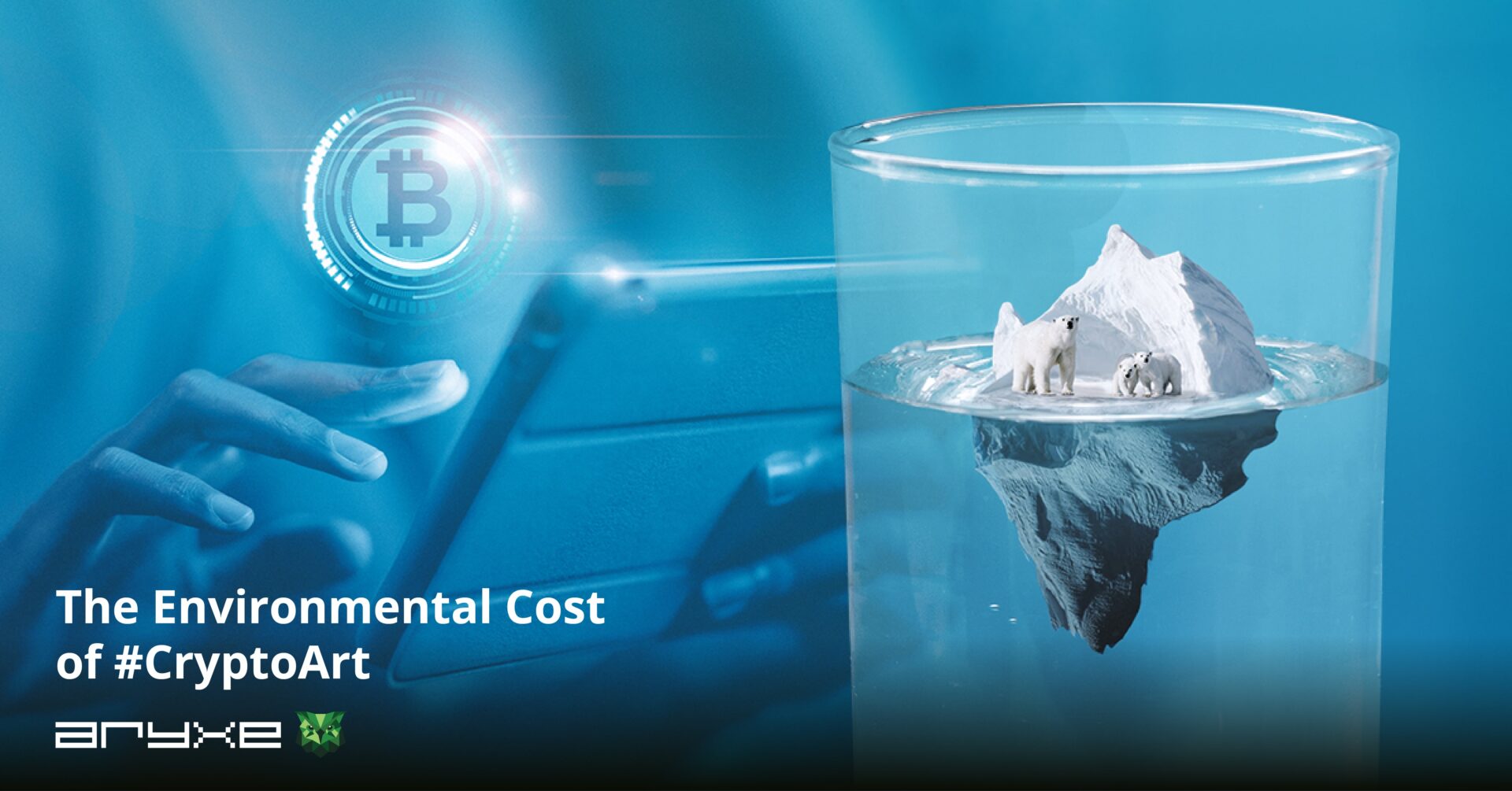 Are you someone who’s head over heels in love with all things crypto and a digital world connoisseur or are you finding it overwhelming to understand all this cryptocurrency and NFT talk? One way or another, you should be aware of the fact that NFTs and climate change have more in common than one may think.

Spending too much time in the digital spaces can make one forget, or at least temporarily disregard real-world problems. Climate change is one of those real-world problems one could easily forget about. Say you ditched using straws, and maybe you even have a dedicated tote bag for your groceries, and you do your bit when it comes to recycling – but have you ever bought crypto art or an NFT? If you’re nodding somewhat nervously, you’re probably already guessing that no amount of straws you say no to can balance things out now that you have contributed to climate change.

Before diving into the topic of how a purchase of an NFT emits more carbon than going on a road trip with 5 of your friends and everybody coming with their own car, let’s start with some basic explanations.

What does NFT stand for?

You have most certainly heard about the NFTs already. There’s been so much hype about it lately that it’s close to impossible not to have  And although you’ve probably come across the term, it’s likely that you don’t quite understand what they are. So let’s cover that first and then talk about how all this climate controversy is connected to NFTs.

NFTs are non-fungible tokens. There, you’re good to go!

Right, sorry, let’s make that a bit clearer. Non-fungible means that something is unique and can’t be replaced with something else.

Imagine you owned the actual Mona Lisa painting. But wait, not the one that you can buy from your art-aficionado neighbor painter, no matter how close to the real deal it may be, but the actual one that Leonardo da Vinci painted five centuries ago. This would make you the only person who has the original, and although copies could still be flying around, you would be the only individual on this planet actually owning the rights to the original painting.

And now replace the Mona Lisa painting in this story with a cool GIF or a tweet. Owning one of those would make you an official owner of an NFT.

Most of NFTs are part of the Ethereum blockchain and Ethereum is a cryptocurrency, such as Bitcoin or Dogecoin, but its blockchain keeps track of who’s owning and trading NFTs.

Therefore, in order to buy an NFT, you are paying the current owner (or the creator) of the digital asset in a cryptocurrency, using blockchain technology.

The blockchain is a database, or a digital ever-growing list of data records if you will, which contains multiple chronologically stacked blocks of data. Each new block is linked to the previous one; if you change just one block, all the other information will also be changed.

To paint a picture, imagine a group of obsessive members who are crazy about keeping track of things that happen. They have a long list of complicated rules to make sure that every single member writes down the exact same set of records about what happens each day. Once their data is noted down and accepted, it becomes excruciatingly difficult to change the record, as more and more records are added on top of it (in a form of a chain). And, they also have outsiders who stop by to check out all these records, so they can see that Janet ate the last PB&J sandwich at 10:18 am at the kitchen counter, just 2 minutes before Mark switched the TV off.

This story should help you understand that a change in a record cannot go unnoticed, which is exactly why blockchain technologies gained popularity, thanks to being almost impossible to forge and mess with. Cryptocurrencies are essentially built using blockchain technology, and they’re by far the most well-known usage of tech. That’s also the reason why some, mostly well-known, cryptocurrencies have extremely high prices, thanks to the added security. And, well, here comes the ugly part, they are also that expensive because of the energy needed for them to exist in the first place.

Did you know that a single Bitcoin transaction equals around 50 days of energy consumption in an average US household?

Maybe you’re wondering how can a simple tap on your smartphone screen use up so much energy in the first place. And the answer to that is its decentralized structure, which was this jaw-dropping sensation back in 2009 when the enigmatic Satoshi Nakamoto minted the world’s 1st cryptocurrency. The same decentralized structure is driving its huge carbon emissions footprint.

To verify a transaction, Bitcoin requires computers to solve ever more complex math problems. According to Paul Brody, global blockchain leader at EY, “In the case of Bitcoin, this is done by having many different competitors all conduct a race to see how quickly they can package the transactions and solve a small mathematical problem”. In fact, the miner who completes the mathematical equation the fastest not only certifies the transaction but also gets a small reward for their trouble in the form of a Bitcoin payment. So now we’re basically having numerous miners using electricity in this race for reward. Despite having possibly tens of thousands of computers racing to solve the same problem, there’s ultimately only one that will receive the Bitcoin honorarium.

This process is wasteful in the sense that only one of who-knows-how-many machines that did the work didn’t throw it away. Regardless of the fair and secure outcome this process produces, it creates a ton of carbon emissions.

What’s more, a Bitcoin computer cannot be switched off until it breaks down or it is no more able to mine Bitcoin at a profit. Roughly every 10 minutes a new block of data is added to a blockchain. After that, every single one of them has to agree on the same history of transactions so it can be finalized. Then the competition cycle starts again. While doing the “proof-of-work” process, the machines are consuming vast amounts of power. It eats up so much power, that minting one NFT equals 100,000 Visa transactions. Yup, you heard that right!

Going back to the environmental impact

All that energy has to be produced somewhere and computing power relies on electricity and we all know how electricity is produced – using renewable and non-renewable resources. When it depends on the latter, resources such as fossil fuels, it emits CO2, which on its side intensifies the greenhouse effect on Earth, contributing to climate change. Rings a bell? All that jazz about glaciers melting, contributing to rising water levels, and the extinction of different species of animals and plants. Nothing major compared to owning a really rad GIF, #amirite?

So, coming back to the point of our article after many detours – the main reason tying NFTs and climate change together is the dependence of the former on significant energy resources, which is unquestionably unacceptable in today’s world when we ought to make efforts to save this planet from ourselves.

Calculating the % of culpability

When you create, buy or sell an NFT using Ethereum, you are responsible for a portion of the emissions generated by the miners. Still, a valid question is whether NFTs are the ones increasing emissions from Ethereum or taking on the responsibility for the emissions that would have been generated either way. Besides, NFTs are just a piece of the puzzle and a small portion of all Ethereum transactions.

The point is, trying to figure out the % of culpability of NFTs is something like calculating your share of emissions from the last flight you were on. Being on that plane makes you responsible for a portion of what it emitted to the atmosphere, but not buying that plane ticket wouldn’t ground the plane, which would result in the same amount of pollution anyway.

Individual behavior turns into a real issue when it starts driving trends.

Will there be a future with cleaner and greener NFTs?

The solution to the giant energy consumption doesn’t necessarily require going back to centralized systems, like Visa’s network. After all, the idea of cryptocurrency and blockchain tech was to eliminate the middleman and their centralized power over finance.

Switching to renewable energy, relying on the “proof-of-stake” mechanism, embracing pre-mining processes, introducing carbon credits or fees – all of these are valid options to making the current system more in line with the full potential of green applications of blockchain technology.

And hey, no one here wants to stop you from owning a genuinely cool piece of digital art. You do you! But still, maybe just consider purchasing NFTs while relying on greener blockchains using some of the above-mentioned alternative methods, such as Altcoins for instance, using the “proof-of-stake” method.

Hopefully, we laid some groundwork here so that you can roll up your sleeves and get acquainted with cleaner cryptocurrencies and a carbon-neutral future.