Becoming a pioneer in a new era – are businesses ready to adopt Blockchain? 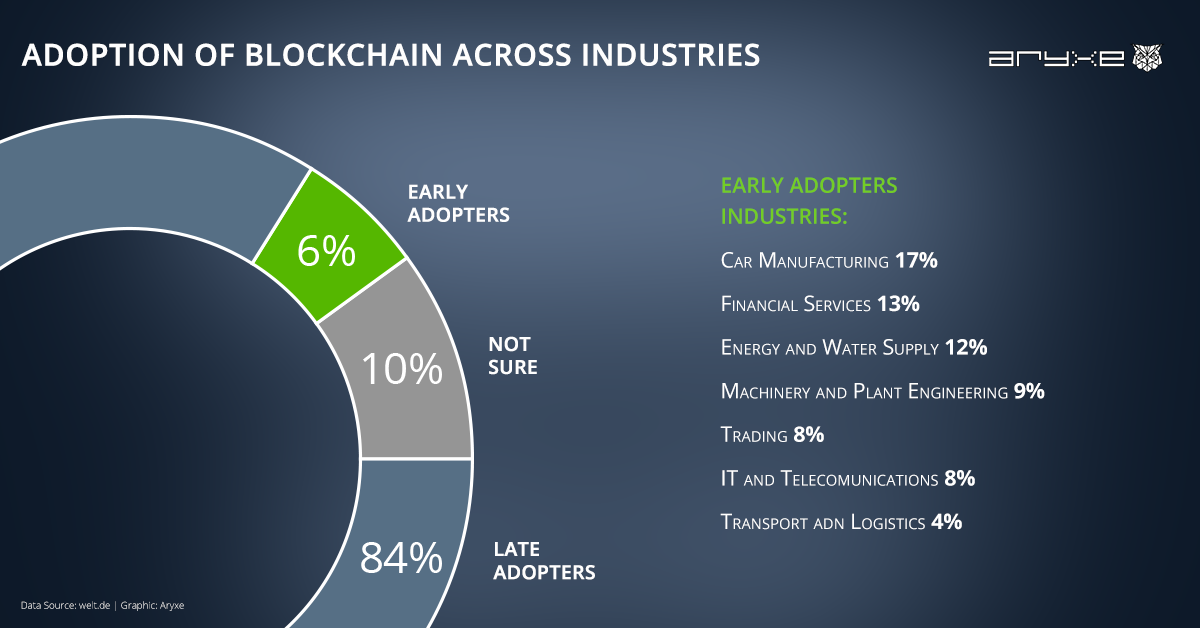 What was the latest thing you read about Blockchain? Ever since the massive growth of the technology, news media have been scattered with fraud allegations, suspicious uses of cryptocurrencies or numerous plunges in the bitcoin stocks.

With this vague representation of the Blockchain technology in society, it is hard for the general public to establish an accurate understanding of what it involves and how it is used to drive innovation. To clarify the actual prospects for a future where Blockchain will play a crucial role in the way business is done, we look at how companies comprehend the potential of the technology and its applications.

The mass misunderstanding of the Blockchain technology by the end customer or organization is the main driver for the aversion towards it. In a research among 50+ people companies by Bitkom Research in Germany, only 12% of respondents consider Blockchain to be an interesting and useful technology in the future, positioning it at the last place among other similar technological trends. On the flipside, businesses consider that Cloud Computing to have the greatest potential for providing actual business results, followed by Big Data, Internet of things, 3D Printing and Artificial Intelligence (AI). The reason for the lack of trust is attributed to the low interest and investment in the area due to the high numbers of perceived risk factors, leaving only a small number of pioneers of the technology.

Further, it goes without saying that the first thing that comes into most people’s minds when talking about Blockchain is cryptocurrency (notably its association with supporting the payment of illegal and criminal activities on the Silk Road because of the animosity the technology provides). This is only one side of the story, nonetheless, because Blockchain is essentially different from crypto-currencies. In fact, cryptocurrency is only one of the many applications of Blockchain.

What makes Blockchain so useful for financial transactions is the security it provides. Since the information in a transaction is not stored in a central server but decentralized on multiple machines, it is thus very difficult this chain to be manipulated. The same model can be fundamentally applied to many other areas. We are still in a very early stage to predict when the technologies will be permanently established in the operations of an industry or what are going to be its exact uses. Also, as we previously mentioned that most businesses consider themselves to be late adopters of the technology, it puts the exploration of innovations in the field on a hold.

As a potential disruptor in many industries, it is natural that Blockchain would need some time to be adopted by markets. Investment decisions are difficult to make when there is not a mass-market adoption of the technology, and mass-market adoption can occur when there are ready-to-use applications. Nevertheless, by observing the current innovations across early-adopter industries, we can highlight the many uses of the Blockchain technology which present huge potential for businesses.

Among the industries most positive about the adoption of Blockchain are Car manufacturing and Financial services. Both rely mostly on the security features of the technology in conducting transactions, decentralizing sensitive information, facilitating share trading with greater accuracy, as well as smarter contractual agreements. Next to data integrity, the added benefits of simplification of processes also makes big data more manageable, not only in businesses dealing with large amounts of data, but also in manufacturing and supply chain where the need for tracking information throughout the entire chain is prominent.

The case for the improved user experience of products using Blockchain technologies is also huge on the table. Blockchain can greatly enrich the automotive experience of customers by introducing new features in vehicle locking and unlocking, granting access to multiple users, and integrating it with other systems. In Utilities, basic problems occurring in switching suppliers, settling bills, and managing renewable energy trading certificates can be easily solved by the simplicity and traceability of Blockchain. What is worth noting is that while Blockchain is viewed as a separate technology from Big Data, AI, etc., it is often a facilitator of increasing the functionality of these technologies. For instance, it is being used to enable a private chain in the infrastructure of IBM Watson IoT and in 3D Printing to support smart contracts.

Creating an environment where similar applications of Blockchain have real-world value would require addressing the stigma surrounding it. Apart from companies and the general public, governments also play a key role in this process by investing in informative research and supporting digitalization with comprehensive policy-making. Overcoming the notions of what we have already observed about the technology, understanding its fundamental principles, and adopting it in a solution-based approach would pave the way forward to making a meaningful contribution of Blockchain and any other technology to society and the economy.