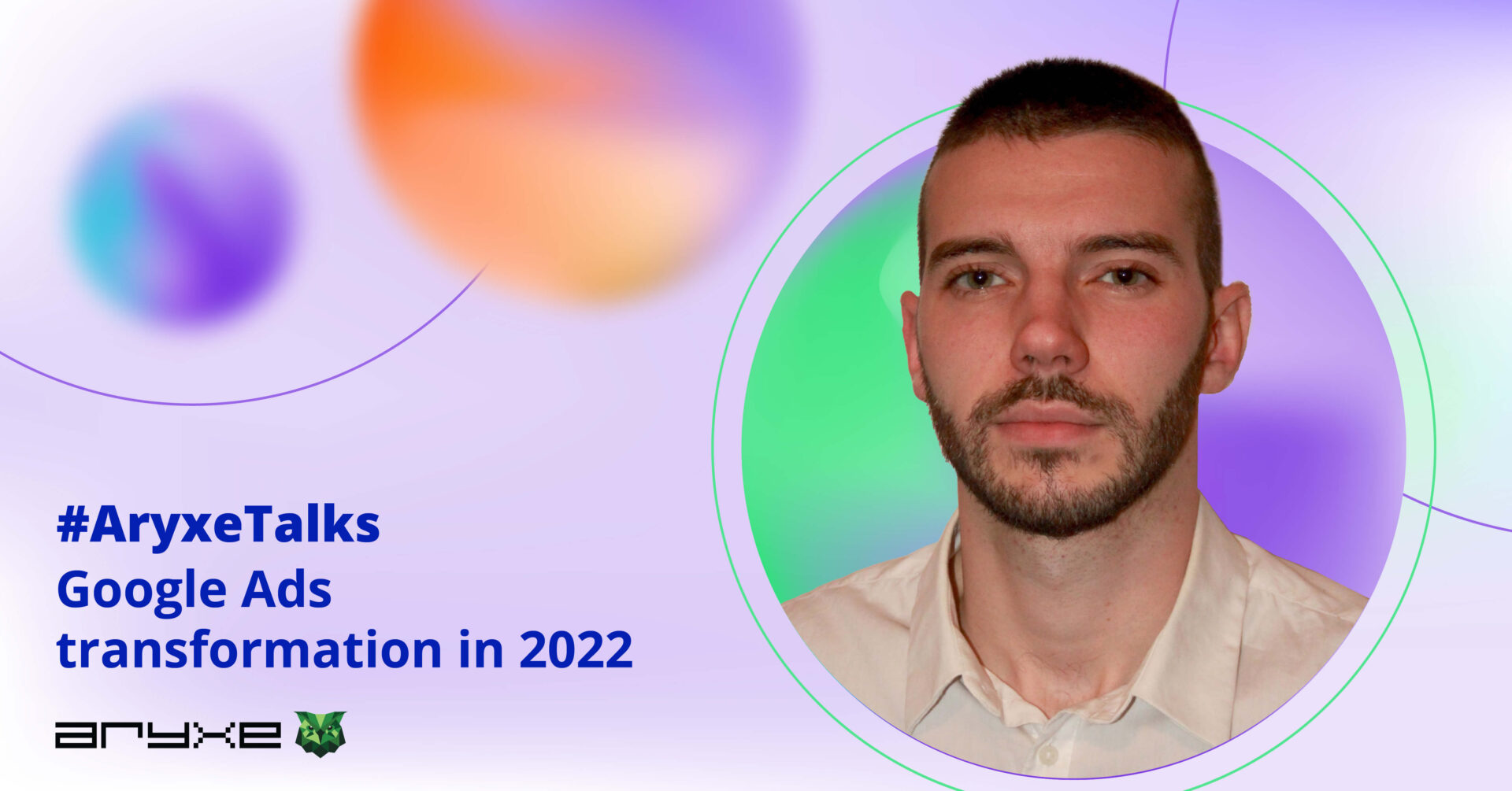 Google Ads is a vital part of modern advertising. By using the Google Ads service, you can boost your business significantly. However, Google Ads can be very tricky to use and take plenty of time to master. In today’s interview, we are talking with Dušan Ćurčić, a Digital Marketing Expert at Aryxe, and discussing what does the platform have in store for marketers in 2022.

What are some of the major changes noted in Google Ads in Q1 2022?

Earlier this year, in February, Google Ads announced the 3 top priorities for 2022: automation, privacy, and measurement. When it comes to automation, we had the introduction of Performance Max campaign type recently, and this is still a major topic. It was also announced that Performance Max will be replacing Shopping and Local campaigns in Q3 2022. New automation features are also coming to extensions, specifically for sitelinks, callouts, and structured snippets. Until now, extensions created by Google could not be shown together with manually created extensions. In addition to that, with the iOS 14 update from last year which featured the removal of third-party cookies, measurement has been pretty challenging for most advertisers and thus set as a priority for Google. They are working on new features which will be focused on preserving privacy while also enabling meaningful measurement and I am looking forward to all that’s coming our way.

In your opinion, how successful is the integration of Performance Max?

Performance Max proved to be very successful in bringing results to advertisers. However, this campaign type gives advertisers limited room for optimization and somewhat limited possibilities to display results, so from the insights standpoint, it surely takes some time to get used to. On one hand, we see that Performance Max merges functionalities of other campaign types, including search, display, shopping, local, video, and discovery. It has already been announced that Performance Max will completely replace Shopping and Local campaigns. On the other hand, in its early stages, it resembled a black box to an extent, which isn’t necessarily a negative thing, nor is it surprising. PMax is a relatively new campaign type, and as such, it appeared to offer somewhat limited insights such as the number of interactions and impressions. However, now, with the help of Reports section, we can actually see which landing pages PMax used to generate ads, along with conversions and value associated with them.

Advertisers will be receiving more intelligence on their PMax campaigns thanks to expanded insights planned and announced as part of 7 new updates coming our way. I’m sure I’m not the only one excited to see those updates and how they will impact our workflow.

How is the increase in automation affecting the campaign setup? And, where does the Advertisers’ input for optimization come in?

Increased automation is a general trend, but it is neither something that’s a one-size-fits-all type of deal nor will it happen overnight. For instance, one of the recently introduced features, Auto Apply, might not always be the smartest way to spend your ad budget. There were cases when this feature would add a large number of keywords into a search campaign, all the while keywords were absolutely irrelevant to the actual campaign topic.

Automation may appear like this majestic standalone process that will make the Advertisers’ position obsolete, but we should be skeptical about it. Google Ads is still a highly complex platform, which needs to be synchronized with Analytics, Google Tag Manager, and Google Merchant Center. Small and Medium Businesses, cannot really rely on automation only in order to achieve results in doing online business. While Auto-Apply might be useful from its time-investment aspect, advertisers still need to ensure recommendations applied actually have a positive impact on your ROI and campaign objectives.

How do we determine the right bid strategy and is it always a good idea to turn to smart bidding?

Google Ads offers several bid strategies that are there to help advertisers reach a specific goal, depending on what the goal really is. The question that one needs to ask is whether it’s clicks, impressions, views, or conversions that they are after, and then opt for the most suitable bid strategy based on the answer.

Switching to smart bidding is something that is being greatly adopted and is also part of automation efforts, to a certain extent. The idea behind Smart Bidding is that it takes the guesswork and the heavy-lifting part out of setting bids. It’s basically a set of automated bid strategies relying on machine learning to make the most conversions out of each auction.

Sometimes it seems like smart bidding became the actual standard for bidding strategies but it is important to keep in mind that there are a few different smart bidding strategies, and choosing the right will depend on the determined KPIs. Also, automation features that Google introduces, and smart bidding is not exempted from it, are data-driven, which practically means the more data it has, the better results it will provide.

How does limited data affect the targeting accuracy?

Limited data affects targeting in certain ways, the most obvious being that remarketing strategies can’t reach their full potential. Let’s imagine that if the vast majority of certain page visitors decide to reject cookies, then we would be targeting only a very small portion of our audience, thus increasing the risk of missing an actual lead. Overall, data accuracy can be compromised by users who block Google Analytics cookies, certain browser extensions, ad filtering programs, and private networks, which can further hurt your campaign if that is a behavioral pattern of a large chunk of your site visitors and it can be misleading. That’s just one, and probably the most obvious impact limited data carries with itself. Still, there are other, less obvious ways.

The end of third-party cookies has been on the horizon for a long time and Google announced that Chrome will kill third-party cookies by the end of 2023 giving many marketers a scare. However, it’s important to note that this is not the end of tracking in Chrome. The initiative to create web tech that protects people’s privacy online and still gives companies the tools to build thriving digital businesses is underway and I’m excited to see what the future of digital advertising without relying on third-party cookies will look like.