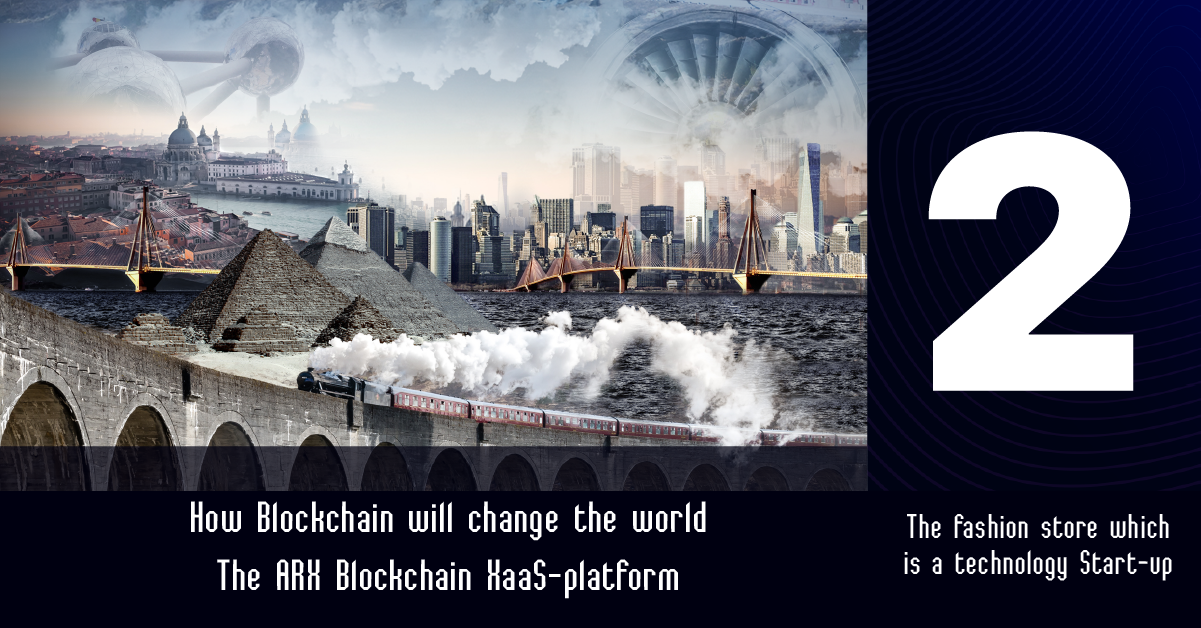 The ARX XaaS-Platform will be an independent platform on which modular XaaS-Services can be compared, analyzed, purchased, traded and managed in a standardized, secure and transparent format. In in a series of 8 articles, Stephan Muehlemann, the CEO and co-founder of Aryxe, discusses the development of blockchain, its role in business today and the ways in which it will change social structures.

2.     The fashion store which is a technology Start-up

3.     The winners and losers of the dissolving financial industry

4.     Blockchain solutions can become a game changer for SMB’s

5.     Freedom and equal opportunities for SMB’s – the world of XaaS

Of bookstores and fast fashion
When Jeff Bezos founded Cadabra, Inc. (later to be changed into what we know today as Amazon) the retail world was a different one. Booksales have been dominated by large chains of Bookstores such as Barnes & Noble, Bookmans in the US, W.H.Smith and Waterstones in the UK, Thalia in Germany, Kinokuniya in Japan, Fnac in France and Kyobo Book Centre in South Korea, to name a few. The Amazon online store was briefly called “Relentless.com” and after changed into “Amazon.com” (Jeff Bezos had been convinced to change the name “Relentless” into something they considered a little less sinister, although “Relentless.com” still points to the Amazon online store). After a couple of months, weekly sales revenues reached $ 20,000 and Amazon sold to over 45 countries. Today Amazon is one of the largest companies in the world, employing more than 300,000 people.

On the way into the future Amazon has not only been one of the pioneers of E-Commerce, it has also made Cloud computing available to a broader audience and continues to pump out innovations such as drone-deliveries. Similar to Google (Google maps and Android to name two of them), Amazon has invented new services as a byproduct or maybe as a logical consequence of innovation-thinking.

Natalie Massanet founded Net-a-porter in 2000 and initially stacked up shoeboxes and clothes in her bathtub in order to compensate for the lack of a dedicated office and storage space. Back then very few people believed that purchasing High-End-Fashion through online stores was something worth believing in. Even fewer people would have imagined that this would become a successful business model. Moreover, selling apparel and shoes via the web was seen as unrealistic altogether. After the merger with Yoox (new YNAP), Richemont offered 2.7bn Euros to the existing shareholders.

Beyond fashion startups
The online luxury fashion market has grown steadily over the past years, from 5-10 % per year in Europe and in the US to 20+ % in China. As much as a clear brand strategy is vital for online luxury retail no large player can afford to ignore this channel. As a result, dozens of high-end online fashion multi-brand stores have emerged, some of them have been already bought up by the established luxury brand conglomerates (Richemont took full control of Yoox Net-a-porter in early 2018). During the 1990s and 2000s the main expansion strategy of luxury fashion brands such as Balmain, Dior, Gucci, Versace and many others was primarily focusing on developing the markets in Asia, Eastern Europe and the Middle East. In recent years though, Online has become the new frontline.

Asos, also launched in the year 2000, today is one of the fashion companies which dominate the online fast fashion market with over 4000 employees, a global presence which includes offices in the US, Russia and China and a yearly revenue of £ 1.9 bn (2017). Due to the nature and speed of the segment and also due to the fact that its customers are mostly young, tech-savvy millennials, fast fashion companies such as Asos, Missguided, BooHoo, AX Paris and many more are growing double digit year by year. As much as Brexit is endangering the future of British SMBs (read more), London and increasingly the Northern cities in the UK are the hot spots for fashion and design. Aryxe will investigate the secret of the success of these relatively new companies and why established players such as H&M struggle, in an upcoming research paper about the fast fashion industry (or, as Nitin Passi, the CEO and Founder of Missguided prefers to call it, “rapid fashion”). As many other E-tailers, Missguided continues to expand into new business areas, onboarding product lines from competitors and investing in flagship stores and improved logistics, thus implementing an omni-channel strategy.

The new face of transportation and logistics
On the 8 March 1919, a NC-4 Curtiss seaplane took off from the US via Newfoundland, the Azores and Portugal. It took 6 stops, 53 “station ships” for guidance – and 23 days to complete the transatlantic journey. When the first transatlantic passenger jet service started in 1958, travelling was still for the wealthy ones only. A few decades later the fierce competition, the introduction of low-cost carriers and electronic self-booking and self-check-ins transformed the once glitzy air-travel in something more mundane – flying as we know it today. Currently, from Heathrow airport alone around 250’000 seats are being offered every given week, on transatlantic flights only.

The hotel business has been static for the largest part of the 20th century. Going to your tour operator or travel service to book a hotel room and then showing a printed voucher at check-in was simply how things worked for many decades. When you read classic novels from the period of, say, the Edwardian era, not much has changed in travel until the late nineties. And then the Internet happened. 20 years later, Booking.com has been founded listing over 1.5 million hotels worldwide and making over 1.2 million hotel rooms bookings every single day. Since its launch in 2007, AirBnB challenged the traditional hospitality industry to an extent that many cities have introduced strict control mechanisms in order to restrict its growth as well as to potentially protect the existing hospitality industry.

Aryxe has a dedicated modular XaaS-service which is specifically designed for the hospitality and tourism industry. If you would like to know what we can do to strategically shape the online image and visual identity of your hotel, golf course, restaurant or car rental company get check out the microsite for the XaaS-hospitality module and get in touch with us  (link here). For additional insights, you might want to check out the article on the article on our Blog which analyzes the role of social media and digital transformation in the hospitality industry.

Something very similar as to AirBnB happened in the transportation sector. Uber, for example, has been in the news almost constantly since it was first introduced in San Francisco. Very much like AirBnB, the service drew most of its initial customers from the fast-forward crowd working for start-ups and technology companies who were simply not happy with the quality and the service traditional taxis and hotels provided. Many areas and aspects of Uber may be debatable. What is not debatable is that the global taxi business was – and is – in a desperate need for restructuring. Dirty cars, unfriendly drivers who charged tourists double prices and clumsy websites (if any) make transport by taxi very often a not-so-pleasant experience. When Uber with its sleek interface, easy access and upmarket cars (Uber Black) challenged the business of taxi drivers in many countries, their organizations and unions used all their power (and often money) to pressure governmental bodies into restricting Uber and other services from further expanding or even push them out of “their” market altogether.

The driving force is technology
Do you notice the one thing all of these companies share? They were all newcomers in their particular market, and they are all “technology first” companies. Amazon, Uber, AirBnB, Booking.com; even online retailers such as Asos or Missguided are first and foremost about technology – only the actual face, the frontend, is about travel or fashion, the backend, the processes, the logistics and actual “fabric” of the companies are all about technology and processes.

As the available bandwidth of the Internet steadily increases and the logistics gets faster (drones), cheaper (autonomous delivery) and more granular, more and more business areas are going to be completely transformed. Blockchain is going to pave the way for the next revolution as it will eliminate traditional banks and insurance companies by providing faster, cheaper mortgages and personal loans. In addition, Blockchain will simplify and democratize business loans and investments for small and medium companies. More about how Blockchain technologies and applications will transform the financial industry and dissolve the current bread-and-butter business of existing banks in the next article.
Copyright 2018, Aryxe Group

All product names and trademarks are the property of their respective owners, which are in no way associated or affiliated with the Aryxe Group. Product and/or company names, logos and trademarks are used solely for explanatory purposes within the context of this article. The use of these names does not imply or suggest any co-operation.