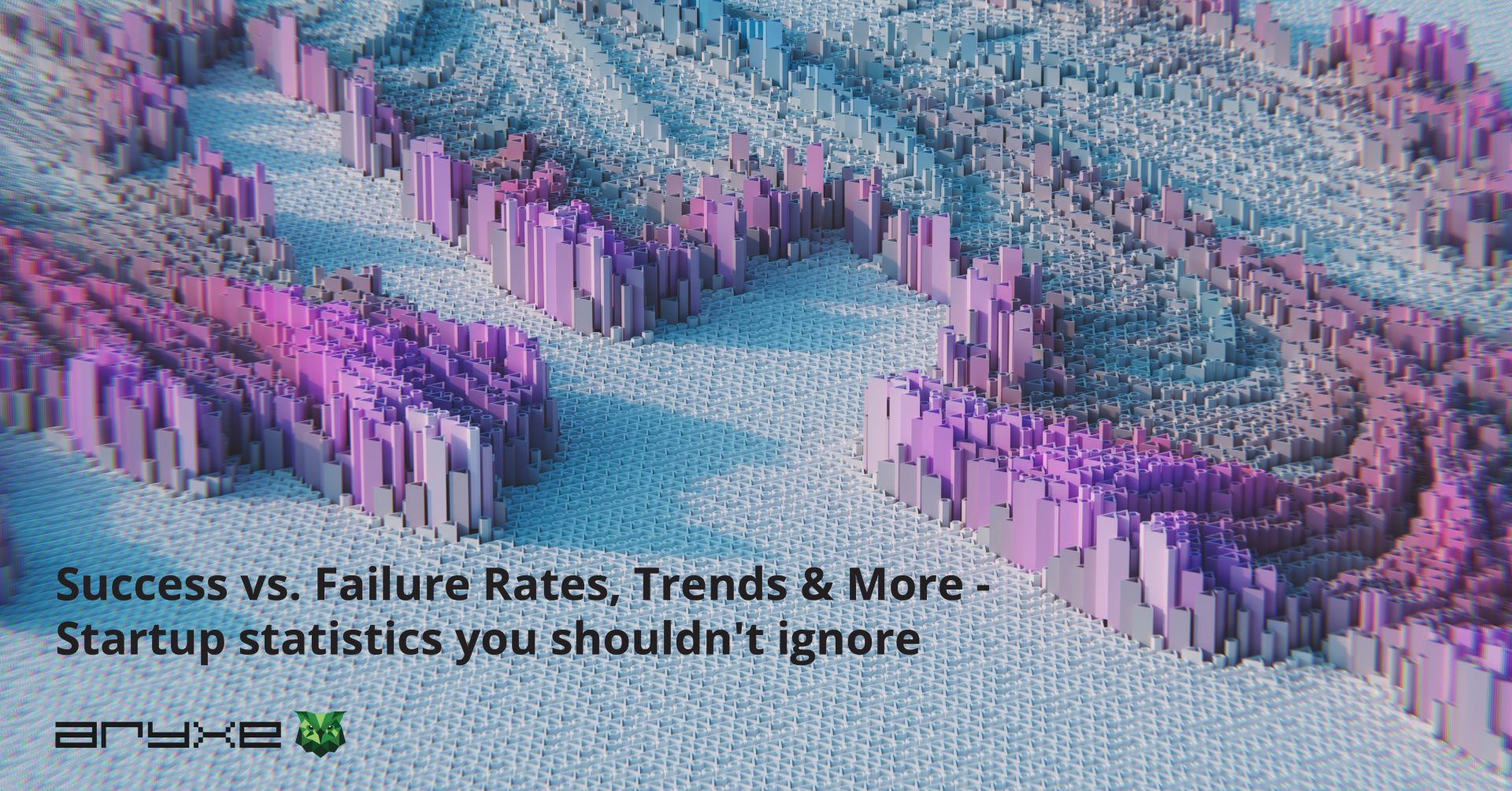 When you hear someone talk about a startup, do you still envision a crew of 5 working from a dusty garage in Silicon Valley? We hope not.

The term startup, for some, calls these cliche images to mind, but in reality, startups are pretty different and highly diverse. So before diving into the statistics, let’s go over the basics to ensure we understand what startups are.

A startup is a young company founded to develop a unique service or product that will be irresistible and indispensable to the customers. Innovation is a term bound to startups. A startup acts almost as a remedy to the deficiency of existing products or services, changing the way of thinking and doing business. Disruption is another term tightly tied to startups.

We’re all familiar with startups, mainly in Big Tech – such as Amazon, Apple, Netflix, Google, and Facebook. But clearly, that’s not all there is to it.

On a very high level, a startup works just like any other company. It has a group of employees working together to create a product or a service that people will want to purchase. However, what they are distinguished by from any other company is how they do their business.

A regular company will do its business in a way that has been done before by numerous others in the industry. For example, imagine the principle of franchising – A restaurant owner franchises an existing restaurant, thus continuing with an existing template while running their own business. On the other hand, a startup tries to invent an entirely new template. Suppose this restaurant owner comes up with a completely new offering, an innovative smart-serving service, for instance. In that case, it immediately delivers a scale other restaurants can’t come near – an entirely new pool of potential customers.

Another crucial difference between a startup and any other company is its hunger for growth and speed. A startup wants to act on ideas swiftly; often, they call this a process of iteration, where they continuously improve their products or services through usage data and feedback. While focusing on the improvement of their offer, they also work on achieving rapid growth when it comes to their customer base. With fast development, a startup can establish larger market shares, in turn allowing them to raise more funds, better their offer, and further increase their audience.

All these efforts towards expansion and rapid growth are usually implicit or explicit in the service of the ultimate goal of going public. Going public means that a company opens itself up to public investment and creates a chance for early investors to cash out and collect their rewards, a concept known as an “exit” in startup lingo.

Startups typically raise money via funding rounds, several of which. The first one is a preliminary round called bootstrapping, typically when founders and friends invest in the business idea. Afterward comes seed funding from angel investors and high-net-worth individuals who invest in promising startups very early. Then comes the different funding series, A, B, C, and D, primarily led by VCs.

The last step in the game of funding would be a startup’s decision to become a publicly traded company, opening itself up to money via IPO, an acquisition by a special purpose acquisition company, or a direct listing on a stock exchange.

The initial stages of startup funding are limited to individuals with deep pockets. These people are accredited investors, as it is believed that their high incomes and skyrocketing net worth are thought to shield them from potential loss. 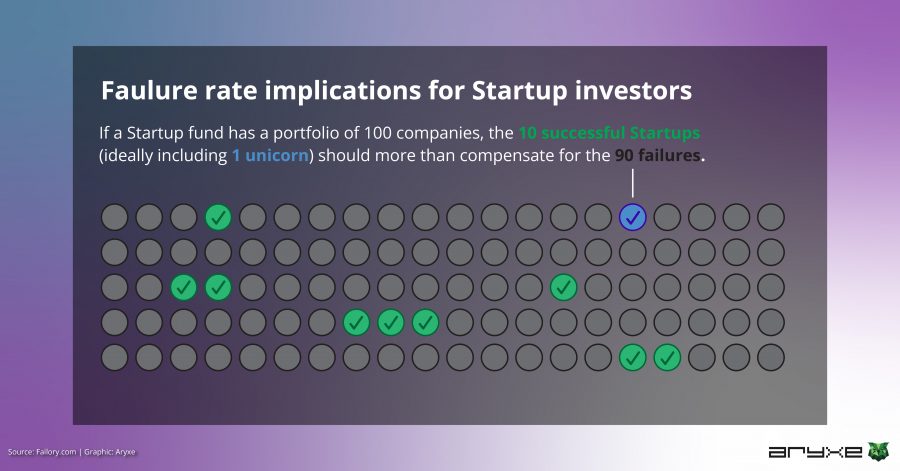 Although everyone would like to see the > 200,000% ROI Peter Thiel once saw on his investment into a bit of startup called Facebook, in reality, most startups fail. According to a report by UC Berkeley and Stanford researchers, up to 90% of startups fail.

They are prone to failure

Everyone knows how high the risk of failure is in the startup world. About 90% of startups fail, out of which 10% do this within the first year, no matter the industry they are in, and about 70% fail during years 2-5; founding a startup is pretty courageous, and the stakes are incredibly high.

Money and time are finite and need to be allocated judiciously – yet the number one reason for failure is running out of cash, tied with the inability to secure funding. Another common reason for failure is also being outcompeted by another startup. Despite the platitudes that startups need to focus on their goal and disregard the competition, the reality is that once a cool idea is a cat that got out of the bag, others will come running in an attempt to capitalize on the opportunity. Finally, misreading market demand is also a reason for failure that’s turned out to be pretty standard.

Sadly, that’s not where the list ends. A startup can fail for a long list of other reasons. It can be due to regulatory issues, legal challenges, ill-timing, flawed business models, poor products, poor marketing, not having the right team, disharmony among team members or investors, the decision to pivot gone bad, burnout, and so much more.

In a 2021 Failory survey, 34% of people interviewed on why startups fail cite the lack of product-market fit as the number one reason. On the other hand, 22% cited marketing problems. Other reasons given were team problems (18%), finance problems (16%), and tech problems (6%). 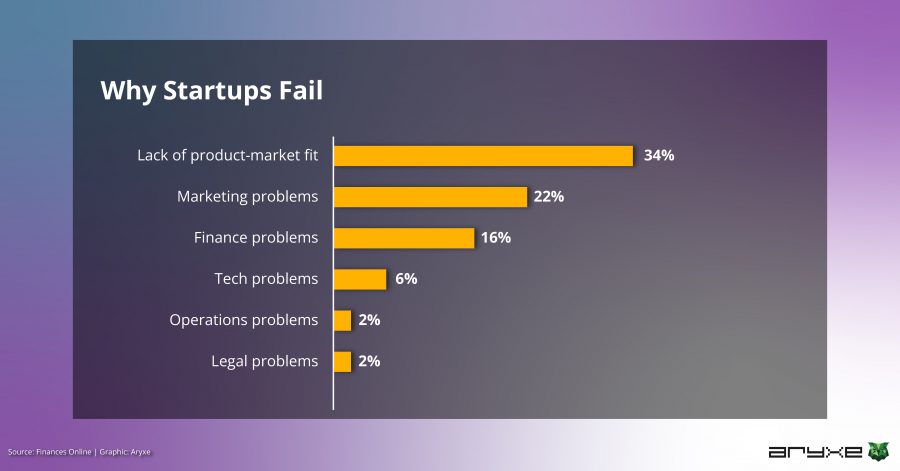 Therefore, nailing all of the above will get your startup closer to that 10% of the ones that succeed.

According to the US Census Bureau, the highest 5-year survival rate for new businesses is mining at 51.3%.

Something no startup should ignore is the importance of paying attention to its customers. However, it seems pretty obvious and redundant to even stress this. Unfortunately, as many as 14% of startups failed due to disregarding the customers’ needs.

A survey from 2019 has shown that 23% of European startups struggled the most with customer acquisition and sales. On the other hand, 11% said their second most significant challenge was attracting and retaining talent. Furthermore, that same survey has shown that 20% of startups said that competition is the greatest threat to their firm. And that threat isn’t the only one, given the impact of rapid changes in market conditions (13%), domestic regulation and bureaucracy (13%), and lack of access to finance (13%).

Three significant areas pose issues for Startups, and it all comes down to talent, cybersecurity, and privacy. 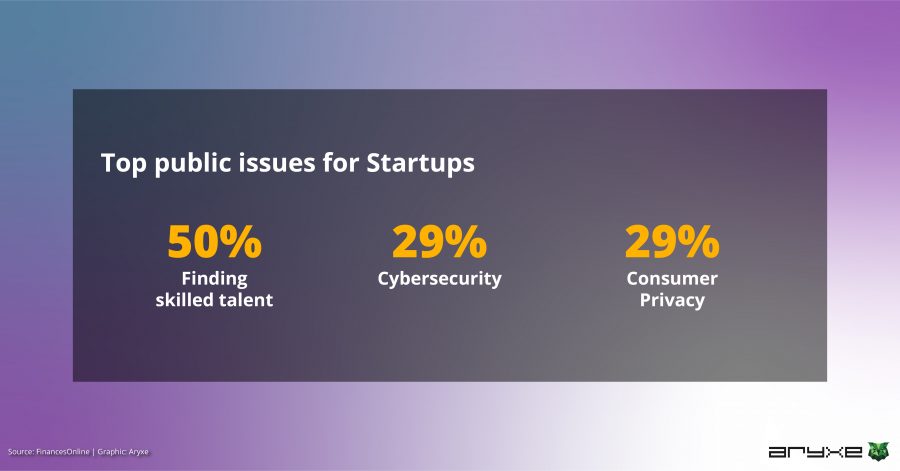 Running a startup is downright challenging, but no startup founder doesn’t know this and maybe even gets a kick out of it.

The most significant industry for the number of startup entities is no surprise – Software & Data, with over 31% of startups, according to StartupBlink, a global startup ecosystem map and research center.

Another curious change noted in the same report is the surge of Healthtec startups. This industry has already doubled its Unicorn count from 2021, which can be tied to the COVID-19 crisis inspiring many entrepreneurs to pay more attention to this critical industry.

Healthtec is followed by The Social & Leisure industry, representing 10.4% of total startups.

Another industry where the Unicorn count has doubled since 2021 is Fintech, which along with the E-commerce & Retail industries, pertain to roughly 10% of the startup sample.

Maybe the most exciting industry on the list here is Transportation, with only 2.6% of the sample managing to produce 81 Unicorns.

Despite the loss in momentum, San Francisco is still ranking first among all 11 indexed industries, which attests to its continued dominance across all sectors of the startup economy. 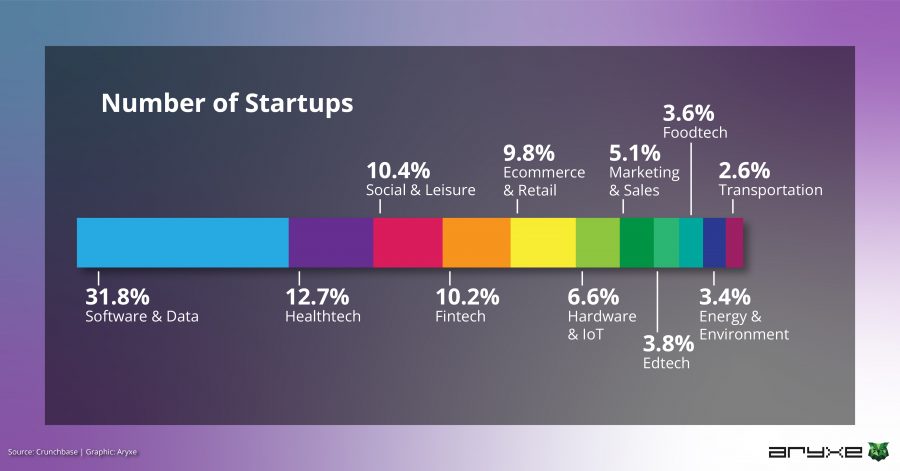 Checking in with the Unicorns

Private companies valued at >$1B are known as unicorns, and the number of these companies soared in 2021 amid the crisis and an unstable funding environment. This momentum continued well into 2022, with the list of unicorns reaching 1,000 for the first time in February 2022. And then, macro trends, such as inflation, rising interest rates, and geopolitical shocks, pumped the brakes on the IPO market and sent some tech stocks into free-fall mode.

This volatility in the market has caused a substantial loss of steam in the rate of unicorn births, putting downward pressure on highly valued companies, threatening their valuations, and creating a roadblock to planned public debuts. 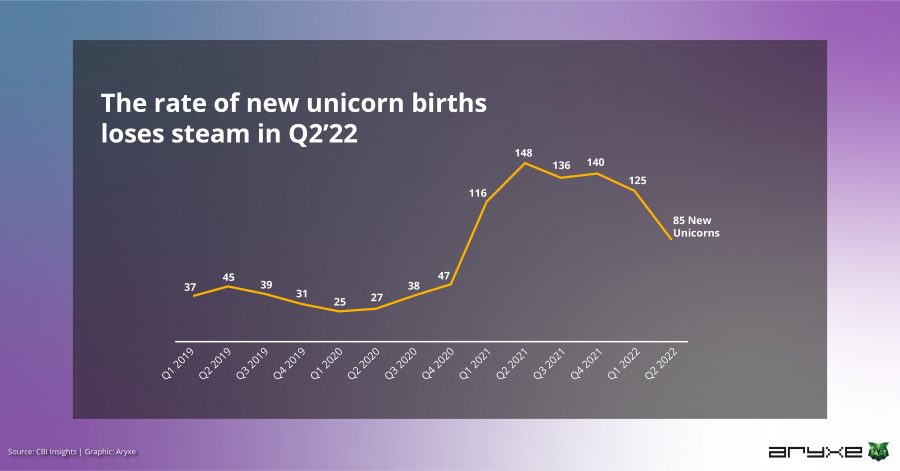 Regarding geographic trends, the US has grown its leading unicorn share by nearly 2% from Q1, accounting for over half of all unicorns globally, with 53.7% being in the US. China is the runner-up with 14.9%, losing slightly over 1% of its share over the same time frame. India holds third place with 5.8%, and the UK is just behind it with 3.8% of all unicorns.

Those who are at the very top

The world’s most valuable private company is China-based ByteDance, which is in the AI category. The company, which operates content platforms such as TikTok and Toutiao, reached a $140B valuation following an investment from Tiger Global Management in March 2020. In addition, the company recently raised a private equity round from China Internet Investment Fund in August 2021.

Rounding out the top 5 most valuable private companies are aerospace manufacturer SpaceX (valued at $127B), fast fashion company SHEIN (valued at $100B), payments processor Stripe ($95B), and buy now, pay later (BNPL) company Klarna ($45.6B — although the company is reportedly in talks to raise funding at a significantly discounted valuation of $6.5B). 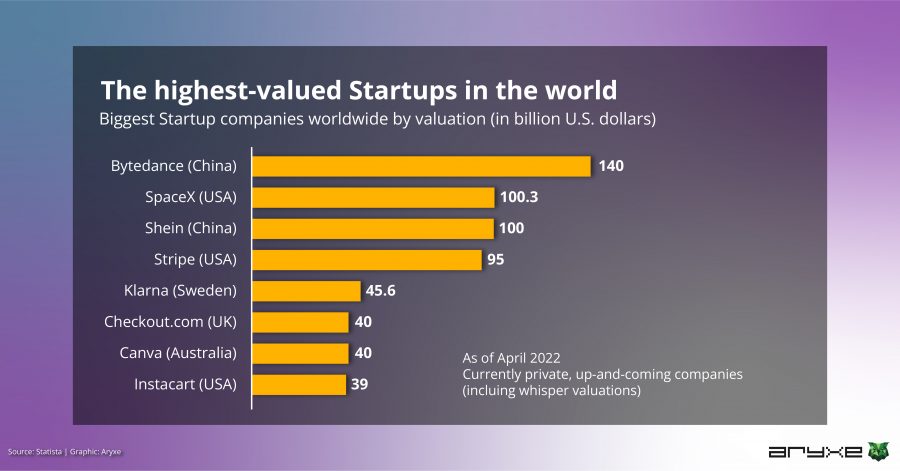 While a handful of startups end up like Uber, dominating the headlines, there are still many other rising stars, and becoming a Unicorn is no longer as elusive as it once was.

Startups have increased in numbers and value over the last few years. So have funding and capital for these types of companies. As a result, the market offers a great set of helpful automation tools, especially for startup businesses.

How can Aryxe help make a startup’s journey a tad easier? We do that by helping you reach your audience and grow the customer base with services such as Social Media and Content Marketing, Digital Advertising, and Design. Learn all about the services we offer here