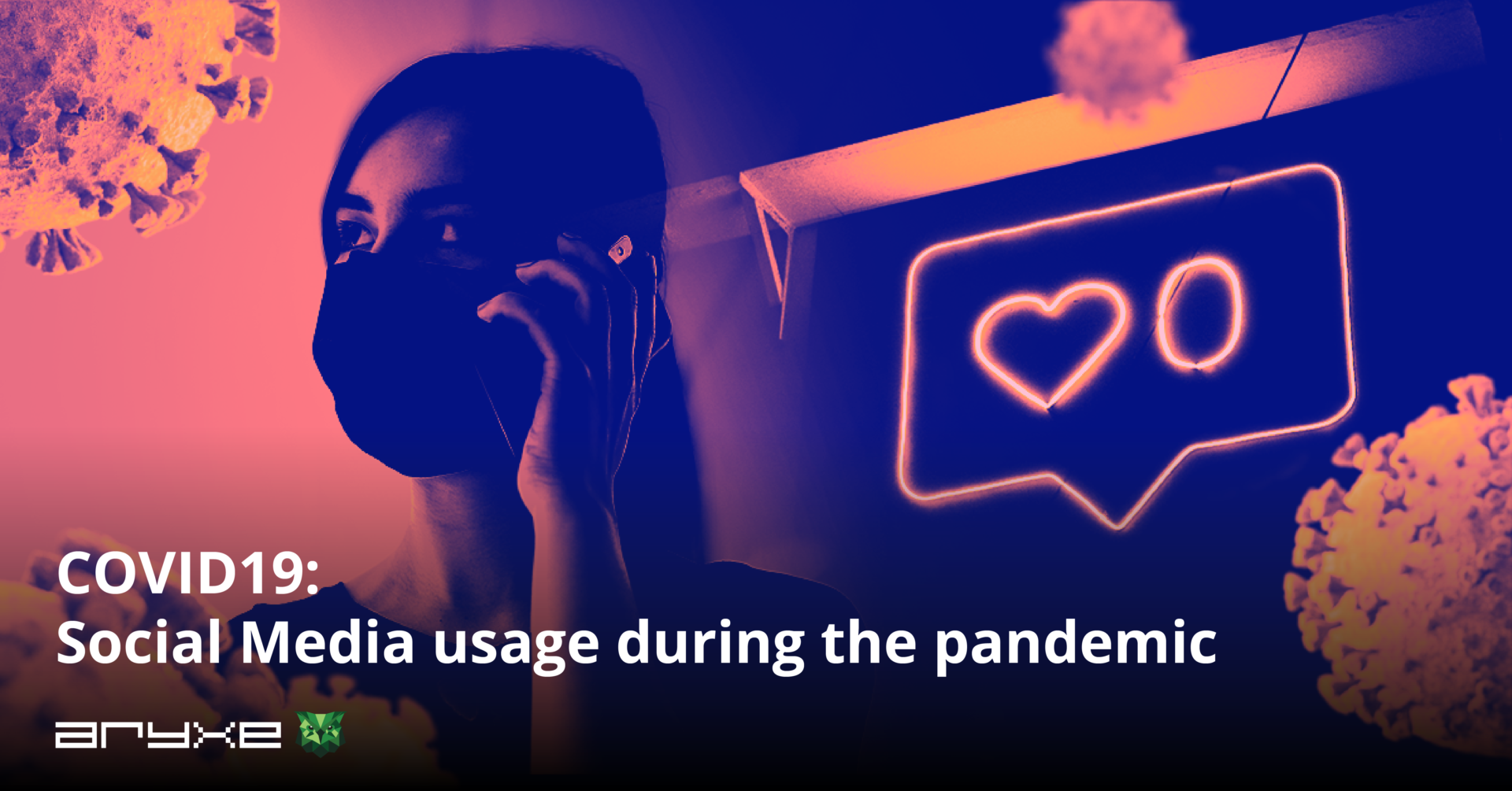 The outbreak of the Covid-19 pandemic has had an outrageous impact on almost every single aspect of life. Social Media, the term we use to describe the computer-based tech that makes it easy to share ideas, thoughts, information, and more through virtual networks, has had a critical role in the times of the unfolding of the pandemic. Are we pushing it too much if we say the role was critical? Potentially, but let’s lay out some facts. Social Media during the coronavirus pandemic has been identified as means to not only enable but also amplify the so-called infodemic as the spread of misinformation in such an uncontrolled space can’t be contained. This made Social Media seem like the perfect place to undermine the global response to the coronavirus pandemic and jeopardize measures to contain the spread. On the other hand, during the lockdown, Social Media platforms made it possible for us to connect with our loved ones while keeping our distance and being respectful to the harsh but necessary measures. To a certain extent, Social Media use during the pandemic has also been described as beneficial as a form of relief and wind down amid all the anxiety-provoking news we were being bombarded with on a minute-by-minute basis.

WHO conducted a survey and when asked what type of Covid-19 information would respondents post on social media most likely, if any, 43.9% of them reported they would most likely share scientific content on their social media profiles. This finding does not align with the general understanding of social media content needing to be light, funny, and entertaining to be worthy of a share.

Fake news awareness is on the rise, but so is apathy

Close to 60% of respondents, all belonging to Gen Z and Millennials by their age group, expressed being very aware of false news surrounding the pandemic and being able to spot it easily. But, the challenge here is to spin them to counter fake news, rather than having them turn their heads around as many of them (35.1%) are simply ignoring it.

The coronavirus pandemic is still influencing and reshaping different aspects of people’s daily lives as we enter the second half of 2021. The global digital landscape is evolving ever so rapidly and trying to keep up with the ongoing changes.

Numerous digital behaviours that people have adopted while being confined have endured, resulting in significant increases in many kinds of digital activity.

A report coming from a cybersecurity firm, Akamai, shows that the global internet traffic has grown by as much as 30% last year. This paints a pretty clear picture on the scale of increased activity which resulted in new trends and milestones surrounding the usage of Social Media during the coronavirus pandemic.

Having said that, we shouldn’t be surprised at the following findings:

None of this is news as it’s a pretty logical turn of events. In the face of the pandemic, lockdowns, alerts, and death toll count, people decided to turn to social media for information and entertainment.

More than half the world is on social media now

The social media user base has grown by over 10% in 2020, taking the global total to 3.96 billion by the start of July 2020 only. Therefore, with more than half of the worlds’ population on social media, we are witnessing a first here. Covid-19 curfews, lockdowns, and shelter-in-place orders definitely played an important role in the increased adoption of social media. 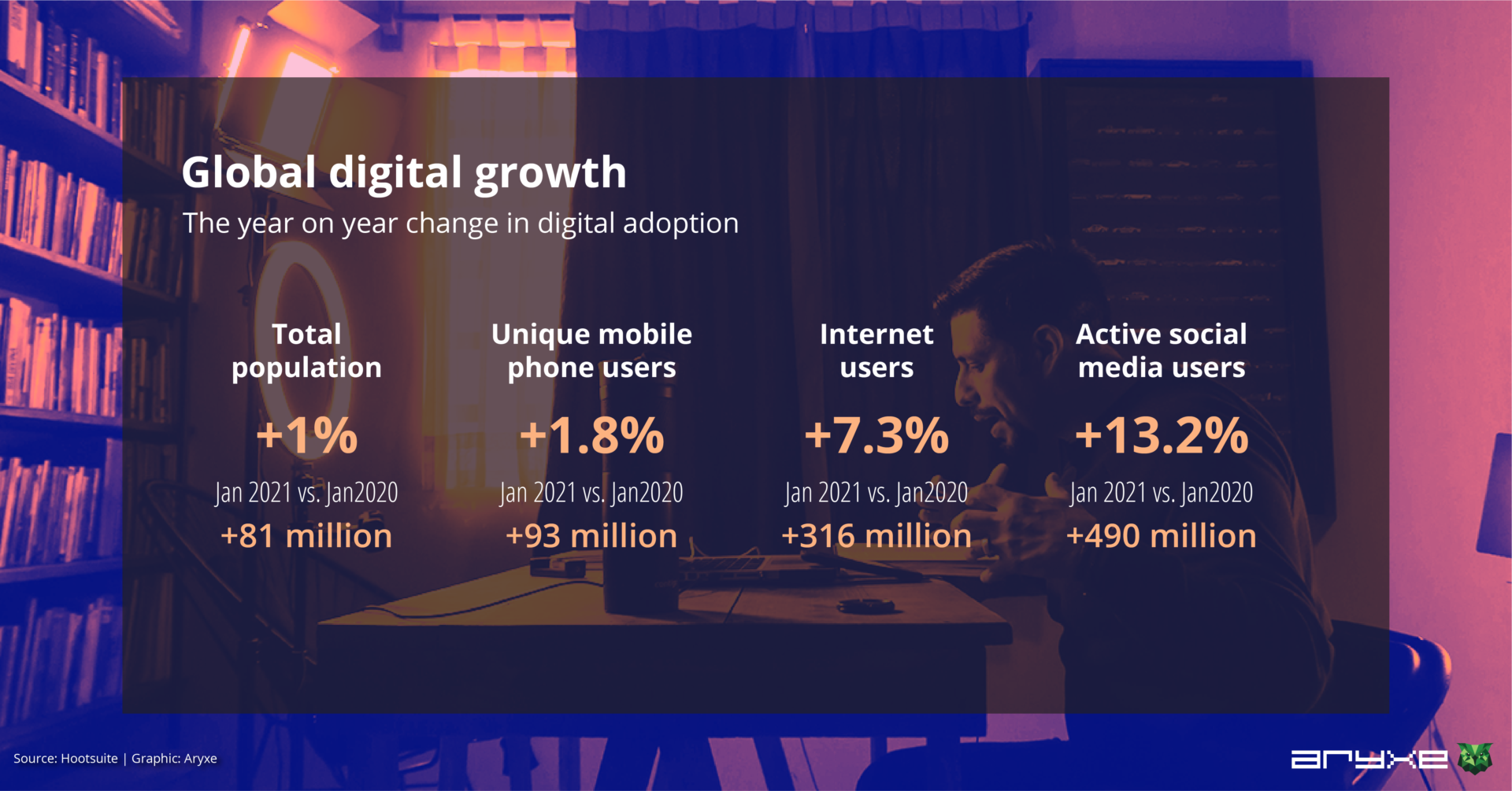 Newly-acquired habits that are here to stay

Research has shown that the increased use of connected devices that was visible in April 2020, while the coronavirus was on the absolute rise, continues today, despite numerous countries’ lifted lockdown restrictions and general ease of measures. 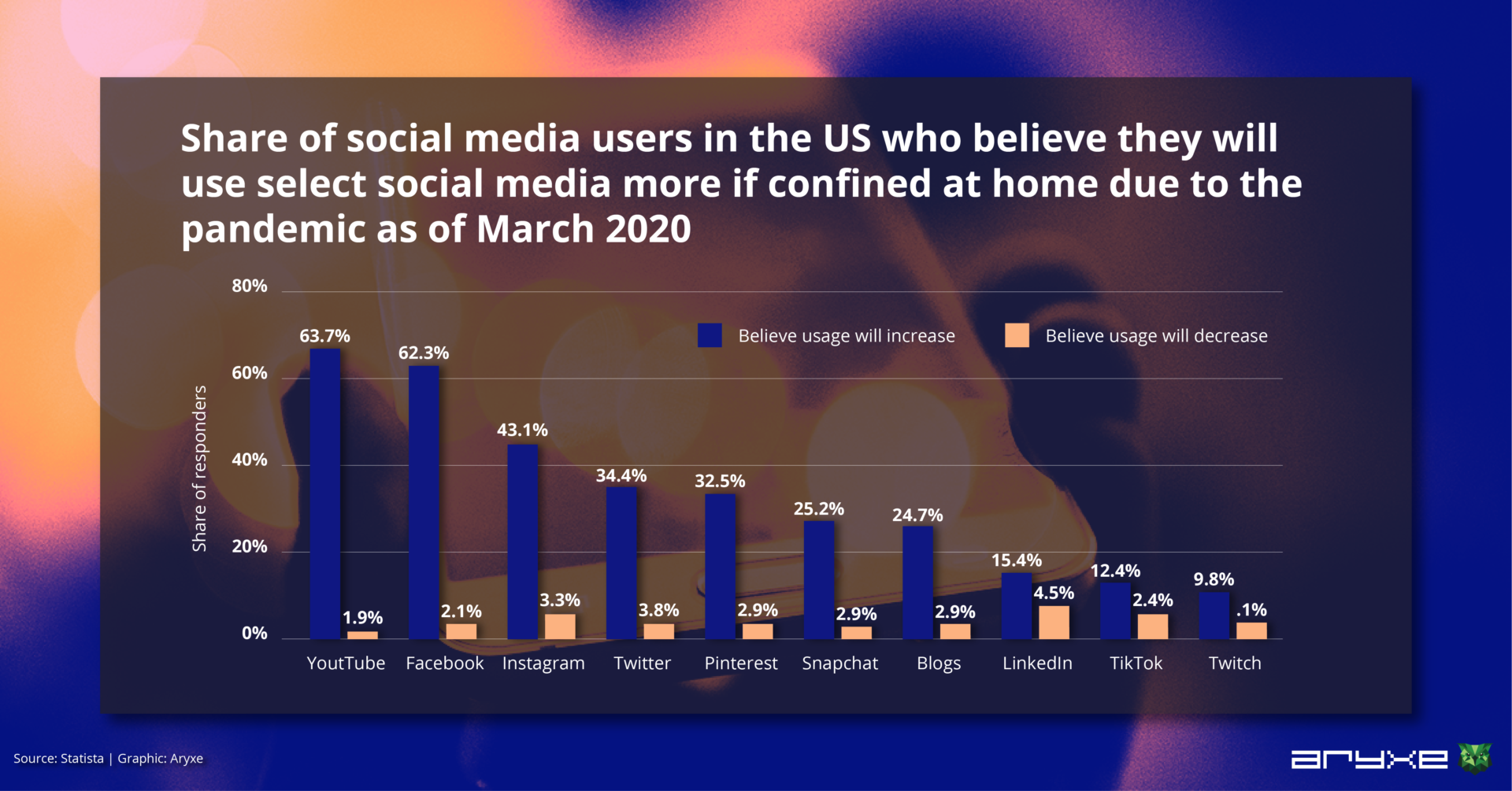 This love affair with social media continues even now, in 2021 when most countries decided to ease the restrictions. So right now there are 4 in 10 internet users that say they are still spending more time using social media than they did in the pre-pandemic setup. And, 1 in 7 respondents said that they continued creating and uploading more video content and are planning to keep that up regardless.

There’s been a lot of commotion around this particular social media platform, and rightfully so as TikTok seems to have won the growth game during the pandemic based on Vox’s report: 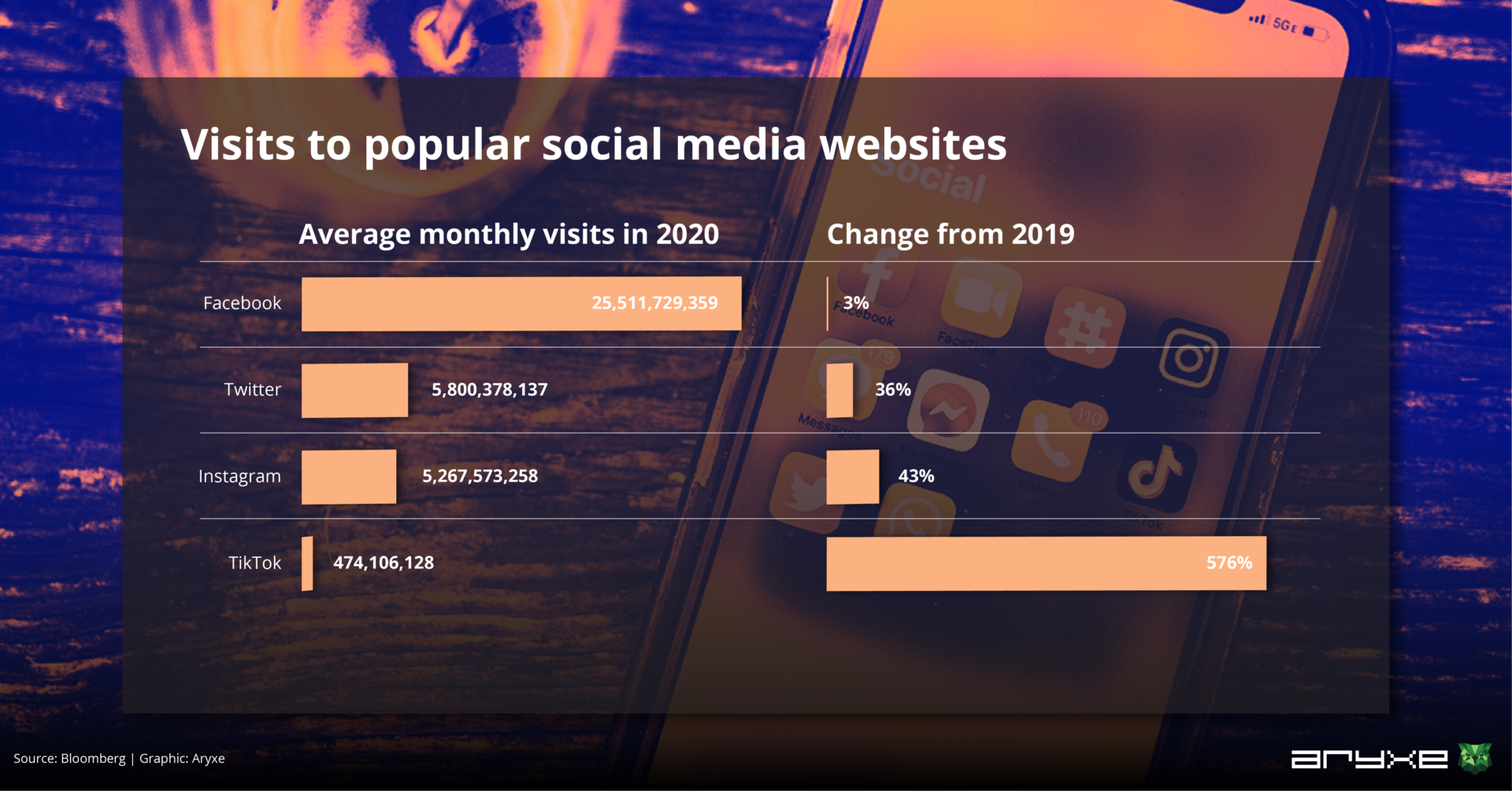 TikTok’s growth has been simply astonishing with 576% more average monthly visits in 2020 versus 2019. Some found it hard to understand why TikTok’s growth was unmatched during the Covid-19 pandemic but the reason is quite simple – it is entertaining!

Conspiracy theories shared on Facebook and opinion wars found on Twitter are commonly associated with the term “Doomscrolling”. Negativity is one of the things people run away from in the midst of a global crisis to preserve their sanity, so TikTok and Instagram were their way out of it.

User growth was most dramatic on sites like TikTok and other social video-sharing platforms, commonly denoted as social entertainment platforms, as a reaction to the negativity that was flooding Facebook and Twitter, including polarization and the uncontrolled spread of misinformation. 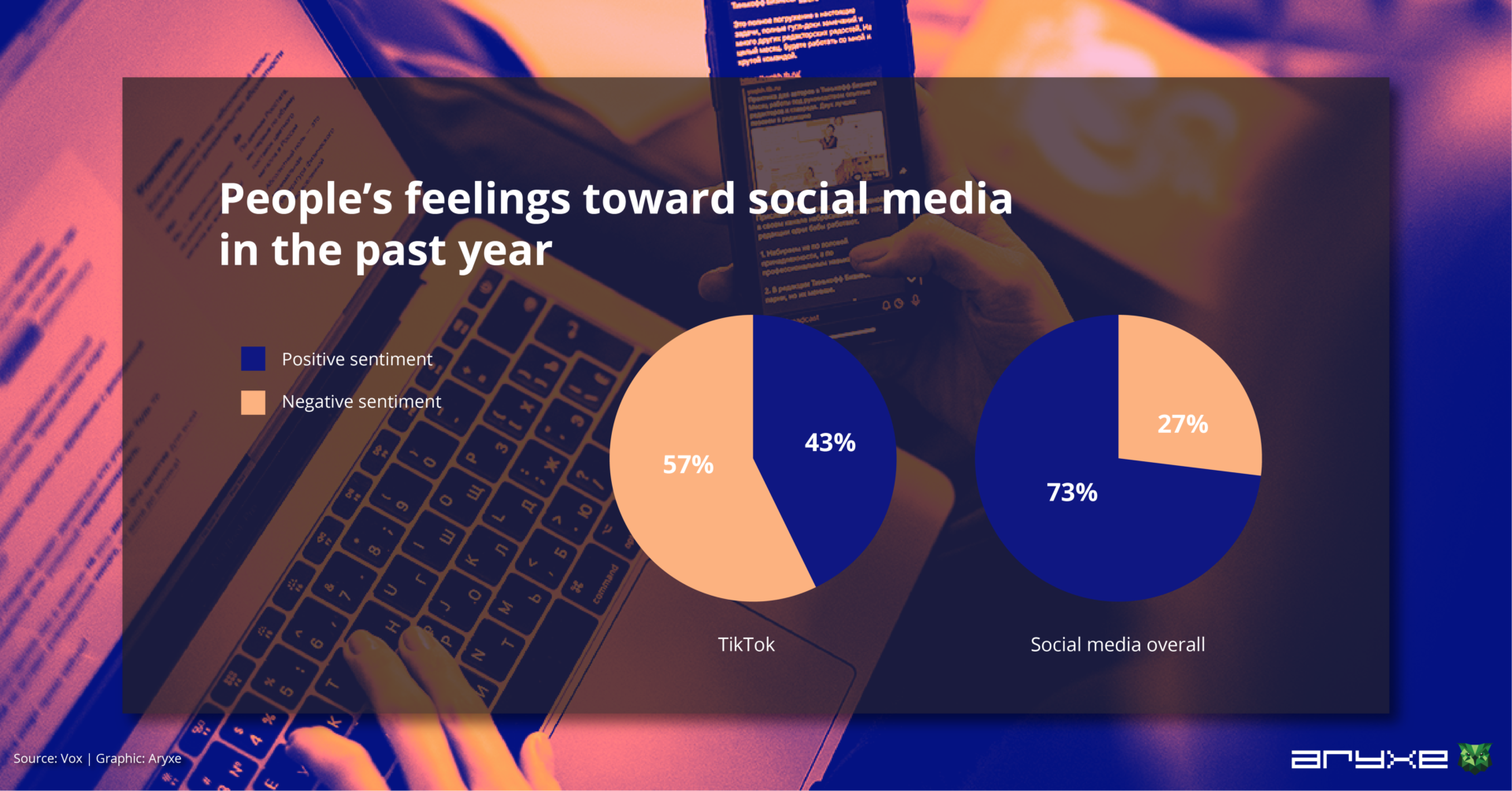 The Internet transformed and keeps transforming the way we understand ourselves, others, and the world. Living as tourists, hoarding one adventurous experience after another, garnering likes to trigger some self-appreciation, and portraying our lives as perfect has been threatened by the Covid-19 pandemic, which induced the need for authenticity and real life.

The pandemic has pushed some of us into working from home, shopping online, homeschooling our children, attending virtual gatherings, and constantly staring at screens. Another interesting trend that was sparked by these developments is the reversal of social media as a place of perfection. The long criticized unrealistic grid photos, especially on Instagram, suddenly became sloppier. Messy houses, children running around and misbehaving, makeup-less appearances, and an uncontrolled environment came to life and made it to our social media feeds – a proper reality check.

Inevitably, platforms that felt most real were the ones who won this game. This is exactly why people have reacted positively to TikTok’s format in which people open up and show their real world. According to the eMarketer data, average users now spend almost as much time per day on TikTok as they do on the No. 1 social site – Facebook. If you think about it, that’s an insanely fast growth given that Facebook has been here for over a decade now and Tiktok is still a new kid on the block.

A sudden surge in online and digital activities

A survey conducted by Hootsuite, which included internet users aged between 16 and 64, reported that the majority of internet users spend most of their time watching shows and films on streaming services. 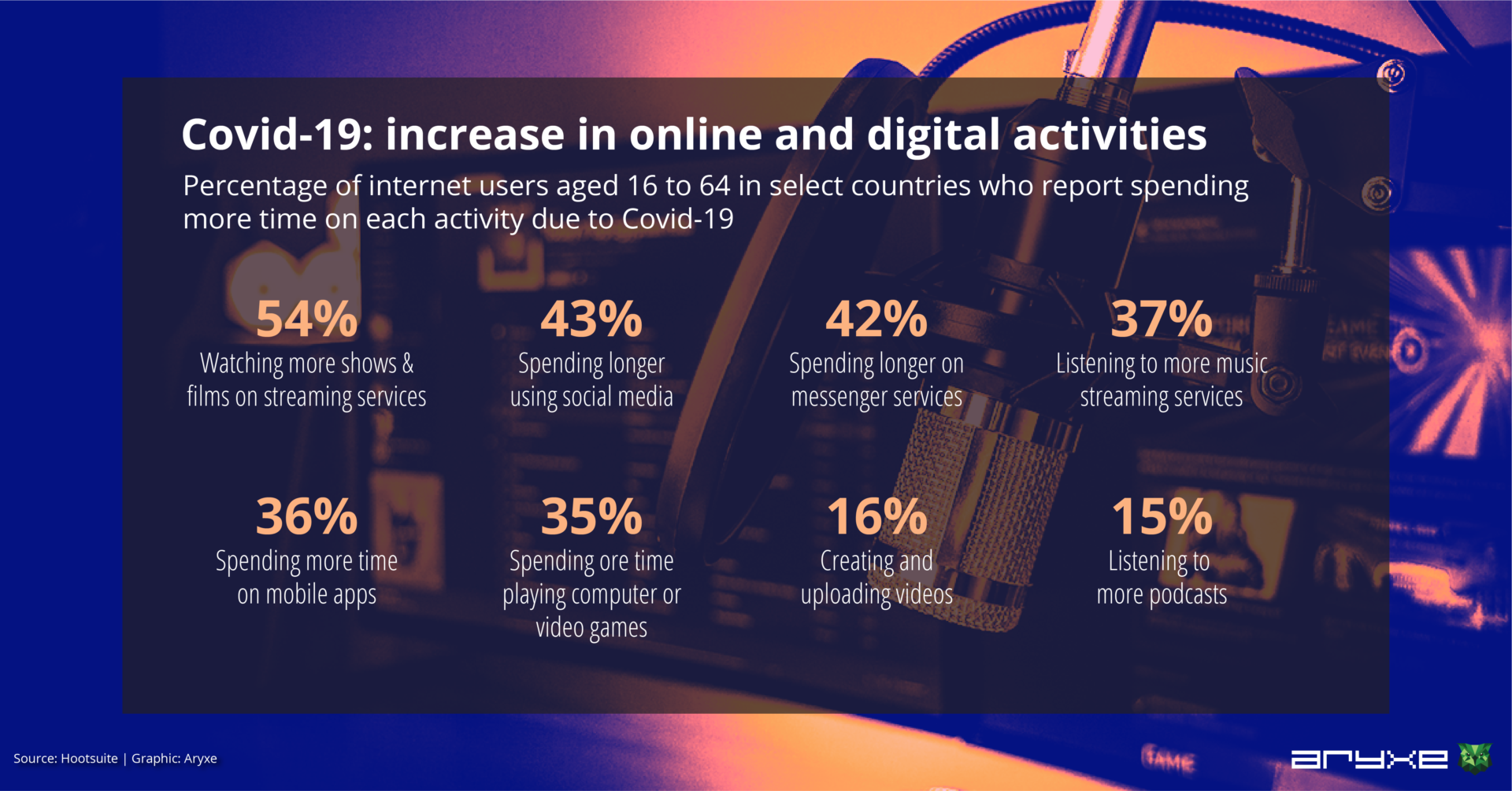 The pandemic also pushed people into using messaging apps more, in order to create a more intimate setting. Facebook became the public square while groups and chats ended up being bars, while video-conferencing platforms turned into clubbing spaces.

What’s the future of social media?

Streaming sites and social entertainment platforms, such as TikTok, will most likely continue their steady growth as the pandemic continues. Although time spent on social media might dip a bit in the years to come, it will remain higher than before the Covid-19 pandemic.

Over the past year or so, social media has become more embedded in our lives than ever before and the increased reliance we’ve developed on it is most probably here to stay.

It’s never easy to break a habit but some think the prognosis of us sticking to social media as much as we are now is a stretch. Will there be a reckoning when the post-pandemic times come? We’d love to hear your thoughts on this, so make sure you place your vote on the poll below!